What is Aphanomyces root rot

Aphanomyces is an impeding fungal disease that targets pulse crops and is found in many parts of the world. It was found in Saskatchewan in 2012 and has only continued to get worse since then. (Chatterton, 2019). As the Saskatchewan Pulse Growers (2020) state, its Latin name is Aphanomyces euteiches and it belongs to the oomycete class. Aphanomyces is a water mold that allows it to be both a soil-borne and seed-borne disease. The resting spore overwinters in the soil or on an infected seed until the conditions become favorable for the spores to begin targeting the vulnerable host plant. This also means that in wet years, pulses usually do not stand a chance against diseases. The legume crops that are susceptible to Aphanomyces is Field Peas, Lentils, Dry Beans, and Alfalfa. The two crops that have partial resistance are Faba Beans and Chick Peas and Soybeans are fully resistant. This is beneficial because these three crops can be used in rotation as opposed to seeding the ones that are fully susceptible to the disease.

How to identify Aphanomyces root rot

Aphanomyces root rot can infect a legume plant at any time during its growing season and the spores will remain in the soil for years. The pulses that are affected the greatest are lentils and field peas. To identify the disease, a plant is pulled out of the ground with its roots attached. The roots will have a caramel colour to them and there be the main taproot with tiny secondary roots attached. The plant’s nitrogen-fixing nodules will not be attached to the roots, as everything will have wilted and died from not having access to water and nutrients. Above ground, the plant will be turning an orange/brown colour and there will be minimal to no side branches growing from the main stem. Across the field, the Aphanomyces will be in little pockets and will be heavily present where compaction is worse. The Saskatchewan Pulse Growers 2020 report declares this is because there is less oxygen in a soil aggregate present and less rhizobia activity so the roots cannot function properly. In heavier land such as gumbo, or heavier clay land the disease will be higher because it is usually more saturated, and it takes a longer time to dry up compared to land that is lighter and sandier.

Effects of Aphanomyces in crops

Aphanomyces targets pulse crops and once a plant is infected, its yield is drastically reduced. If the plant has already faced a growing season full of stress it will not stand a chance and will produce zero to a few pods and seeds per plant. Once Aphanomyces has infected a plant there is nothing a farmer can do to control the disease. One single infected plant contaminates 7 inches of the soil around itself and infects the plants that are around it. (Sask Pulse, 2020). They can spray a fungicide or a biological on it for plant health and other diseases that could infect it but it all comes down to the economic threshold and if it is worth their time and money.

Prevention and control of Aphanomyces

To prevent Aphanomyces from infecting a crop there is a minimal amount that a farmer can do. To reduce the chance of getting Aphanomyces, the susceptible crop should be seeded in lighter land with clean seed and seed treatment is always recommended. The farmer should monitor the cropping history and not seed peas or lentils on a field that has had susceptible crops seeded into it in past years. Intego Solo seed treatment by Nufarm suppresses Aphanomyces root rot up to the seedling stage and after that, the plant is susceptible to the disease. (Nufarm, 2020). As Dr, Syama Chatteron, author of the Top Crop Manager website states (2019) the favouring conditions for oospores to infect susceptible plants is around the temperature of 20-24 degrees Celsius. There are no preventative and controlling fungicides on the market for Aphanomyces root rot control which is unfortunate because once the disease is present and has settled in there is nothing a farmer can do to diminish the disease in that crop year. The only recommended form of control that a farmer can do is not seed a plant that is susceptible to Aphanomyces for at least six to ten years. The zoospores of Aphanomyces swim freely in the water in the soil and once it finds root hair on a susceptible plant it will infect the root and soon after the rest of the plant. Once the zoospores find the nutrients in the roots they convert to oospores and they have a thick cell wall that will last in the soil for years. If the field is not seeded with a susceptible plant these oospores will not germinate and create new oospores to last in the soil. Research has proven that brassicas as a cover crop have a biofumigant effect in the soil and can reduce the oospore levels in the soil. Farmers have noticed this effect in their fields when they seed lentils on canola. This is a huge benefit because it will reduce the oospore levels in the soil.

After viewing the effects of Aphanomyces root rot on pulse crops and how it remains in the soil for multiple years, farmers should acknowledge this and act on it. There are alternative plants to seed that are resistant or partially resistant to Aphanomyces. A major benefit to farmers would be a fungicide that worked wonders or an Aphanomyces resistant lentil and field pea, but the process to create a new fungicide would take years. Aphanomyces is an impeding fungal disease but can be fought with time. If the disease could be overcome this would benefit farmers extremely and would overall affect their income and well-being. 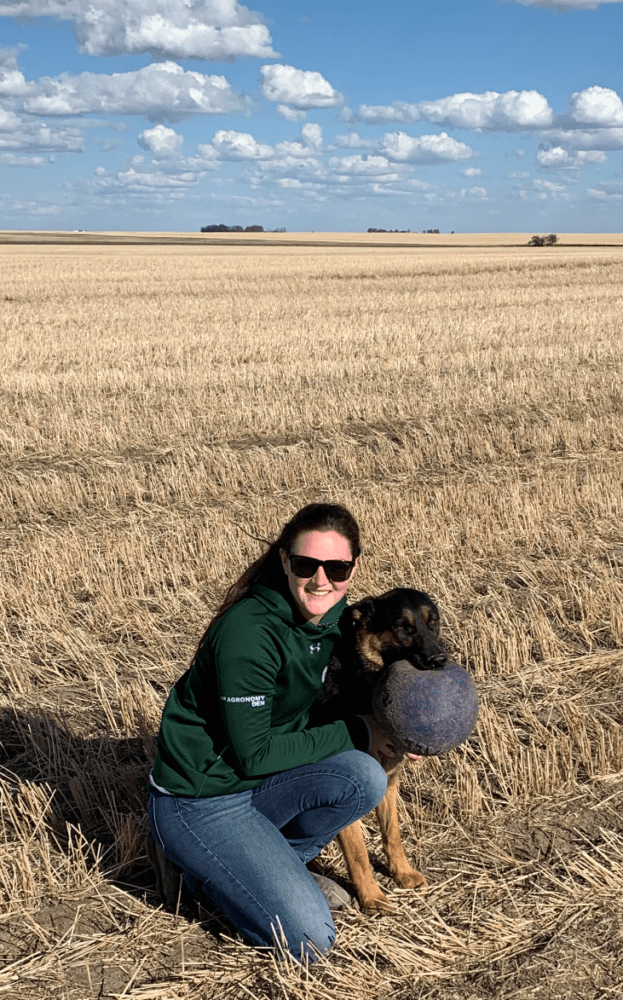 My name is Mariah Winny, and I grew up on a grain farm outside of Rosetown, SK. I am currently in my third year of my agribusiness degree at the University of Saskatchewan. My hobbies are spending time outside and with friends and family. I have always enjoyed agriculture and love learning more about it every day which is what led me to take the agribusiness program. I currently work for my dad and this summer will be my third year at G-Mac’s AgTeam as a summer student. After graduating, I look forward to finding a job in the agriculture industry.