Having the opportunity to supervise an undergraduate thesis is always a highlight during my years’ academic activities. In 2019, I supervised Miranda Emigh’s undergrad thesis that utilized a student survey to explore whether agronomy students perceived the course information they received regarding the safety and use of the common agricultural chemical glyphosate. This blog presents the findings from Miranda’s thesis.

To determine the knowledge around glyphosate, agronomy students from the College of Agriculture and Bioresources at the University of Saskatchewan were surveyed. Miranda’s objective was to determine whether her peer agronomy students entering the agricultural industry could successfully speak to issues surrounding the use of glyphosate. Glyphosate is a common herbicide used for weed control on many farms. There has recently been some speculation about the safety of glyphosate’s use, which was refuted in 2019 by Health Canada, stating that glyphosate is safe for use. Health Canada also extended glyphosate use for another 15 years. Since glyphosate is such an important herbicide to agronomic practices and yet has much lore about its safety, our agronomy students must understand it and know how to speak about it.

Agronomy students were chosen, as many of these undergraduates find careers in relation to pesticide use. Miranda assessed the students’ knowledge across all years of the program according to specific variables. By considering the year within the program, she was able to gain an understanding of whether the familiarity with the subject increased as students progressed through their education. She also considered student experience in the industry and course offerings.

Miranda surveyed students from nine different courses in the agronomy degree program.  Of the 239 agronomy majors at the University of Saskatchewan in the 2018/2019 academic year, she received 47 complete responses, representing 20% of potential students. While she received a good distribution of students across the various years, most responses came from students in the fourth year of the four-year agronomy program. In the College of Agriculture and Bioresources, students declare their major course of study after their first year of classes, which partially explains the lower number of first-year students identifying as agronomy majors.

It’s no surprise when asked about glyphosate, all respondents correctly identify it as a herbicide, and nearly all respondents (96%) correctly answered that glyphosate is a non-selective herbicide. Students were further asked a series of questions regarding their knowledge of glyphosate residues. One question directly addressed the percent moisture recommendation for pre-harvest glyphosate application, while the others addressed maximum residue limits (MRLs). By determining student knowledge surrounding MRLs, it was possible to suggest a students’ ability to express a scientifically supported opinion, given their science-based course content.

Glyphosate has been criticized by environmental activists, for being used in excess amounts and leaving high residue amounts on crops. For these reasons, Miranda thought it was important to assess how many students could correctly answer the recommended pre-harvest glyphosate application moisture percentage rate. Of the 45 responses, 73% were able to correctly recommend the 30% application rate, and only three students selected a higher rate of application. When broken into lower (years 1-2) and upper years (years 3-5) of the program, a significant increase is observed in the number of correct answers between the two groups. When reviewing course requirements, after the 2nd year of course study, most degrees become more specified, which in turn provides a more specific knowledge-base. By upper years, many students have also had summer jobs where they may acquire this knowledge.

Of those who correctly responded (33 students) to the rate of pre-harvest glyphosate application, 73% correctly identified why pre-harvest application timing is important in terms of MRLs.  If glyphosate is applied at too high of a plant moisture level, the plant may not pass MRL regulations. Overall, of the 44 responses, only 68% correctly answered this question. This question was important as it shows that students may not be fully grasping the importance of why the percent moisture recommendation for pre-harvest glyphosate is set where it is. As our future agronomists, many of our producers rely on their recommendations and therefore understanding glyphosate and MRLs is essential.

While agronomy students focus on the residues in the field, it is also noteworthy that they understand chemical residues on our food from the field. In total, 66% of students were aware that maximum residue limits measure the amount of pesticide residue permitted on a food product. Almost half (49%) of respondents correctly identified the MRL to be between 100-1000 times below the safe exposure level for humans (Figure 3). This suggests that nearly half of those surveyed have both received course content and understand the theory behind why MRLs are important, as well as how they are applied. While students may not know the exact number required for a pesticide to be registered, they do understand that the residue levels are significantly smaller values than what is safe for ingestion.

Of the total 47 students, 46 identified that they felt capable of having conservations that explain and defend the on-farm use of glyphosate. Of those students, 57% either agreed or strongly agreed, they were equipped for debates or discussions regarding the use of glyphosate. Students in their third year or higher contributed to 81% of those who were confident in their knowledge regarding glyphosate and its use.

Miranda graduated from the College of Agriculture in 2019. Having grown up rurally, she was introduced to agriculture at a young age, which sparked her interest in pursuing her education in the subject. She spent many years in 4H and continued to be an active member of various clubs throughout her years at the University of Saskatchewan. Since University, she enjoys travelling, trying new restaurants, and spending her spare time outdoors. 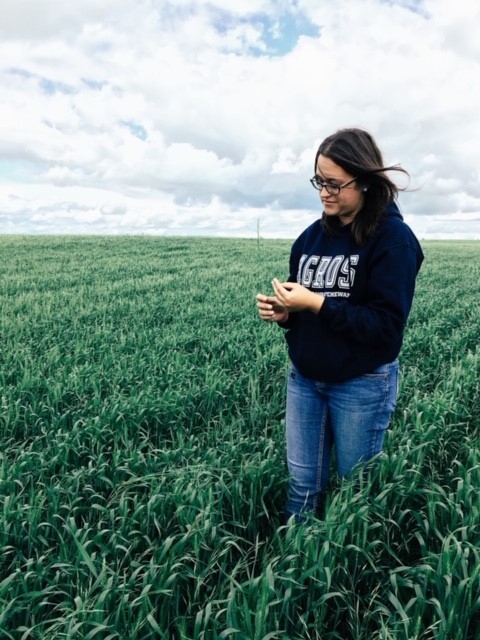