The March approval of GM Arctic apples by Health Canada (HC) triggered considerable debate over whether they should be labelled as a GM product. Food labelling in Canada is heavily monitored and regulated. Food companies can’t simply add any food safety label they might prefer to their food product, it has to be scientifically verified and then approved by HC before being added. For example, the “lower cholesterol” label is found on Cheerios and not on products that haven’t been scientifically proven to lower cholesterol. Companies are not allowed to label in ways that could mislead consumers. For instance, a brewing company could not label their beer as “made from non-GMO barley” as no GMO barley exists. Labelling should not mislead consumers into thinking something exists when it doesn’t.

The big question would seem to be, who want changes in labelling? Well, that really depends on how you ask the question! Those that support labelling will ask the labelling question like this: 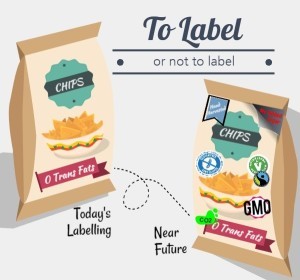 Q: Would you like to have food products labelled for genetically modified ingredients?

When the question is asked this way, the Canadian Biotechnology Action Network reports that over 80% of Canadians say yes.

However, when the question is asked in a slightly different fashion, the results are the polar opposite.

Q: What other information that is not currently on the food package, if any, would you like to see there?

Framing the question this way reveals that only 3% of respondents say GM.

There is just a tad bit of a difference between 3% and over 80%. So, which survey response is reliable? In the field of surveying, prompting a response is not an acceptable method for gather unbiased information. By including GM ingredients or GM food in a labelling question prompts the respondents to automatically think of the topic of GM products, thus substantially increasing the positive response rate. The more acceptable method of surveying is to make the respondent think about what the situation is and how it could be improved, such as the second question.

The demands to label for something that isn’t related to food safety or nutrition is a slippery slope. Hundreds of food safety studies have been done around the world, and nearly all have reported that GM foods are identical to conventional and organic food products in terms of nutrition and safety. Canada uses product-based regulations if a scientific assessment of a product concludes that it is the same as those present on the market, it is then safe and requires no further labelling. If Health Canada changed food regulations regarding GM content from voluntary to mandatory, how much further would this extend? By reacting to social pressure and beginning to regulate food products in a non-scientific manner would create a dangerous precedent that could have no boundaries. Labels could be demanded for things like, ‘Was unionized labour used to pick these apples?’ or ‘Were children involved in growing these farm vegetables?’. None of these issues have anything to do with food safety or nutrition. By responding to the present social pressures for non-scientific demands, regulators would be required to change the regulations every time a new food fad came along. Which, based on recent food fads, would be about every 6 months. Think how cluttered food packaging would be with labelling, you would not be able to easily pick out the important information from the jargon. Clearly, having regulatory standards that changed this frequently would be impossible for the industry to respond to, so this is why regulations are based on science, not social pressure. Labels need to provide consumers with facts about food safety and nutrition and to move away from this system would be an insult to the 97% of Canadians that are happy and satisfied with Canada’s current food labels.