Food poisoning is more serious than you might think

Remember this commercial, with the “tummy turning” bug picked up while travelling? While we’re concerned about catching foodborne illnesses/diseases whilst travelling, people are less aware that these bugs are not just “far from home trip spoiling bugs”, they’re everywhere. Recently the World Health Organization (WHO) released its first report estimating the prevalence of foodborne diseases.

What are foodborne diseases?

A foodborne disease or illness results from ingesting (chemical or microorganism) contaminated food. Contamination can occur at any time through contact with polluted air, soil or water prior to consumption. In North America, we occasionally hear of vegetables like spinach and lettuce getting recalled. Most of our foodborne diseases are not life-threatening. But that doesn’t mean we shouldn’t be concerned about foodborne diseases.

Why should I care about foodborne diseases and the WHO report?

No one is exempt from coming in contact with foodborne diseases. Symptoms can be mild to extreme, and in rarer occurrences lead to irreversible diminished health or death. 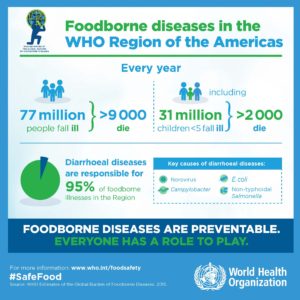 The United States is a leading nation in food safety. Nonetheless, an estimated 48 million Americans will annually catch a foodborne illness. Foodborne illnesses are estimated to cost  $15.5 billion (USD)/year in the US alone. While that is substantial, the biggest cost is the loss of lives to foodborne illnesses, which reached 3000+ deaths in 2011.

While foodborne diseases occur at home and when travelling, greater risk occurs outside developed nations. Nations with strong healthcare systems and safe food supply chains reduce the odds of contracting a tummy-turning bug. Foodborne illnesses are most problematic in continental Africa, South-East Asia and the Eastern Mediterranean.

What are these illnesses?

There are four categories of hazards: chemical and toxins; diarrheal disease agents; helminths; and invasive infectious disease agents. The world-leading illnesses are Norovirus, Enterotoxigenic E. coli, Giardia, Shigella, and Campylobacter (the bug from the AmEx commercial). Norovirus and Campylobacter are the highest causes of illness, death and DALYs in Canada, Cuba and the US, followed by Salmonella and Toxoplasma gondii.

Ensuring your food is safe 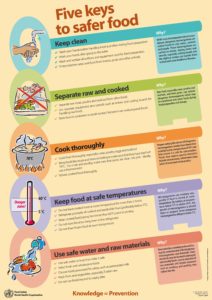 What can be done to reduce the risk of foodborne diseases? The WHO suggests five keys: clean hands, food, storage and the surfaces of preparation and cooking areas, separate raw from cooked, cook thoroughly, the temperature is key and use safe water and raw materials. Although these all seem like things we already do, they’re daily tasks that we don’t attach much risk to, which can lead to reduced thoroughness, which is all a disease needs to become foodborne. Also keep an eye out on the CDC, FoodSafey.gov and Canada’s Public Health Agency website to see if there’s been an outbreak or food recall.

Plan on travelling soon? Even if you are not, stay on top of your vaccinations. Some foodborne illnesses can be prevented, there’s no need to rely on your credit card company to find you a doctor for diarrhea or other symptoms just because you didn’t get vaccinated.

Equally as important is trust your intuition. If something doesn’t look or taste right, don’t consume it, and if you’re not feeling well, see a doctor. Many foodborne cases go undocumented.