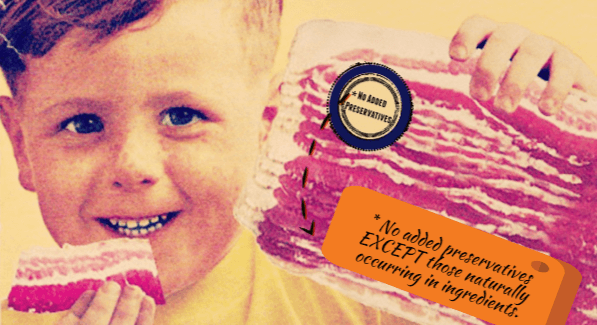 I enjoy grocery shopping, but I’m increasingly becoming agri-vated by labelling and how food companies misuse labels to market products to consumers. Don’t get me wrong, product labelling and marketing is important, companies know how to catch my eye and convince me to buy their products; nevertheless, I’m becoming agri-vated about misleading marketing. I’m an agricultural economist, I’m educated and aware, but I can’t know everything when it comes to the production of my food. I don’t always have time to read the full label on every product while standing in the store aisle in order to make an informed decision about which product is best for me.

Know that I’m not stating that a product which is labelled in a certain way is any healthier or safer, I’m just upset that companies market to the weakness of consumers’ food awareness. My biggest beef, or should I say pork is with those all ‘natural’, no antibiotic, no added hormone, and no preservative delicious branded bacon products.

In my household, we eat ‘natural’ branded, no-added preservatives bacon, we had assumed that no-added preservatives meant no nitrites, and that was a better health choice. This marketing strategy has me willingly paying $1.73-1.86/100g of bacon at Walmart, while regular bacon costs are as little as $1.00/100g. Because I pay a higher price for bacon there is this lingering question; if there are no added preservatives, what is it that keeps this bacon fresh? I can’t let this question go unanswered, I need to know what I am really buying.

Packaged bacon is comprised of pork, water, salt and sugar, ‘no-added preservatives’ bacon doesn’t contain the salts (sodium phosphate, sodium erythorbate, and sodium nitrite) than conventional bacon does. The University of Wisconsin-Madison Meat Science Laboratory explains that in conventional bacon sodium phosphate helps maintain moisture; sodium erythorbate is a variation of vitamin C, an antioxidant that reduces the level of nitrosamines produced. Nitrosamines can cause cancer and are formed when nitrites and amines are heated at high temperatures. Sodium nitrite is an antimicrobial antioxidant curing agent which helps to maintain flavor and colour. Interestingly enough, nitrites are actually natural to the human body and are present in our saliva.

No nitrite added to my bacon, that’s why I purchased no-added preservatives bacon, however, I have been duped! In lieu of sodium and nitrites which preserve that precious bacon, celery extract, sea salt and vinegar are used. The American Journal of Clinical Nutrition published that roughly 80% of consumed nitrites come from vegetables in our diets. Celery extract is a natural source of nitrate used to cure bacon and other meats. 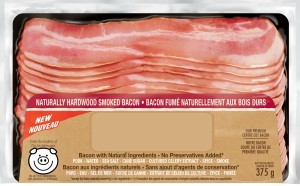 Agri-vated now? These companies which produce the ‘no-added preservatives’ are in fact using naturally produced preservatives. Their tendency to market in such a matter, along with additional claims cleverly placed at the bottom, back-corner or below, sometimes in a smaller font on the packaging, of added naturally occurring preservatives, seems to me to be intentionally misleading consumers such as myself. Because of these marketing practices, it’s my fault for not reading the full packaging front to back, bold font to hidden text, which has me paying more for what I thought I was getting less of, nitrite preservatives.

As much as I feel it’s the company’s responsibility to be clear in their labelling, I need to do my part and take more time to inform myself in the food isles. Let us know if you have been frustrated by food companies labelling practices.

I also have a question for anyone who can answer if there is no sodium erythorbate used to help reduce the levels of nitrosamines produced, do other ingredients slow down this process?

Some facts about nitrites in bacon: