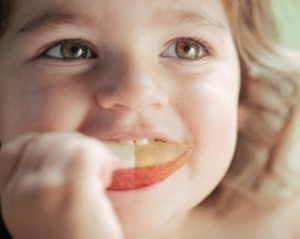 My kids love apples. I can’t even fathom how many times I’ve wished I could have included sliced apple into their school lunches when they were in elementary school. The inability to include apple slices in children’s school lunches is something that has not only frustrated me but thousands of other parents whose children enjoy eating apples. Prepackaged sliced apples were not yet on the market when I was packing my boys lunches. (Packaged apples are preserved by ascorbic acid and calcium absorbate/carbonate, with the disadvantage that they are not fresh.) Fortunately, a Canadian company has struck upon a wonderful solution.

Okanagan Specialty Fruits, located in Summerland, British Columbia, recently received approval from regulatory agencies in the United States to begin commercial production of the Arctic Apples. This variety of apple is still under review for food approval and commercial production in Canada. Given the regulatory harmonization that exists between Canada and the United States, approval for Arctic Apples in Canada is expected shortly.

The question I was curious about was, why doesn’t the apple turn brown like all other apples after being bitten into or cut? The answer is chemistry. Apples produce a chemical (polyphenol oxidase or PPO) when the flesh is exposed to air, the flesh turns brown. This is known as oxidation. The novel solution developed by Okanagan Specialty Fruits was to slightly change the gene responsible for the production of this chemical that is responsible for oxidation. Scientists at Okanagan Specialty Fruits mapped the apple genome and found a PPO gene in other apple varieties that produced PPO at much lower levels. The scientists transferred this gene to the Artic Apple variety which now produces significantly lower levels of oxidation. The result, the Arctic variety that doesn’t turn brown when cut.

Many people may ask, is it safe? This is an appropriate question in the face of new food technology. This variety of apple was submitted to the American regulators in 2010. Approval was only granted in February of this year, US regulators took 5 years to assess and review the science and the apple itself. This is more than double the length of time it would normally take to review a submission for a plant variety approval. Normally, it takes between two and two-and-a-half years to assess a new plant variety. American regulators were exceptionally thorough in their assessment of this product, concluding that the Arctic varieties are similar to any other variety of apple, posing no risk to the environment or human health.

Okanagan Specialty Fruits expects to have these apples available for purchase by next year in the US. With Canadian approval expected this year, hopefully, these apples will be available in Canada in at most, two years. While my kids have now passed the age of taking apple slices to school, these apples will reduce the challenge and stress of packing fresh school lunches for children.