Over the past 25 years, Saskatchewan farmers have shifted away from traditional land management and weed control practices such as frequent tillage and summerfallow towards more sustainable practices. Several factors facilitated this transition, including improvements in seed, fertilizer, chemical, and equipment technologies. The 1995 introduction of herbicide-tolerant (HT) canola also played a role by providing farmers with effective in-crop weed control.

Reductions in tillage and summerfallow have benefitted farmers economically. They also contribute to improved environmental sustainability through reduced soil erosion, improved soil moisture and quality, and reduced fossil fuel use. One important contribution is improved carbon sequestration, which occurs when carbon is transferred from the atmosphere into soil storage pools, becoming soil organic carbon (SOC). Carbon sequestration is an important part of reducing net greenhouse gas (GHG) emissions. However, before farmers can receive recognition for their efforts in helping to reduce net emissions, the improvements in carbon sequestration must be quantified.

Using farm-level data collected through the Saskatchewan Crop Rotation Survey, the change in carbon sequestration from Saskatchewan farmers was quantified. The survey asked farmers about their changes in management practices between 1991-94 and 2016-19 regarding seeding, harvest, fertilizer, tillage, summerfallow, and chemical use. Responses from farmers who completed the survey between November 2020 and January 2021 were used for this research; however, the survey is still open for any farmers who would like to contribute to our continued research.

Over the past 25 years, Saskatchewan agriculture has witnessed big changes in land management practices. Land management data was analyzed for 99 Saskatchewan farmers who responded to questions regarding 2016-19, and 52 farmers who responded to questions regarding 1991-94 (Figure 1). Between 1991-94 and 2016-19, this sample of Saskatchewan farmers reduced their use of conventional tillage from 55% to 3% of hectares. The use of minimum-tillage increased from 32% to 37% of hectares, while the use of no-till increased from 13% to 60%. The use of summerfallow within a farmers’ crop rotation decreased from 46% to 1% of hectares.

How Has Technology Helped Farmers Change their Management Practices?

Farmers indicate that HT canola, other genetically modified (GM) crops (corn and soy), and glyphosate have all facilitated their adoptions of sustainable management practices. Participants were asked to indicate to what extent they perceived the various technologies to have helped in reducing tillage and summerfallow practices, on a scale from 1-10 (Table 1). Results suggest that the use of the chemical, glyphosate, played the largest role in reducing tillage and summerfallow. This makes sense, as without the use of this common, complementary chemical, GMHT crops resistant to glyphosate would not be able to effectively control weeds in-crop.

Table 1: To what extent do you believe each of these technologies facilitated the adoption of reduced tillage and summerfallow? (1 = did not at all facilitate, 10 = played a major role in facilitating)

Note: The standard deviation represents the variability in the dataset. It tells us, on average, how far each response value lies from the sample average. For example, in the first column, the standard deviation of 2.73 tells us that the average response was 2.73 points in either direction of the mean value of 7.3.

Farmers also indicated that, on average, they expected 24% of their land would include summerfallow management in the absence of HT crops. When compared to the 1% of land currently managed using summerfallow, this estimate of 24% represents a huge step backwards in farmers’ sustainability efforts. It also suggests that many farmers feel there would be no viable alternatives to HT crops to assist in maintaining their continuous cropping systems.

When asked what would change on their operations without the use of HT canola and glyphosate, farmers mentioned a number of factors including reversion to frequent tillage and summerfallow, a decrease in profitability and yield, changes in chemical use and crop rotations, and other adverse environmental effects (Table 2). These results indicate that farmers rely on the use of these technologies to maintain their current cropping practices.

Table 2: What would be different about your farming operation today without the use of the following technologies?

*Other environmental effects include mentions of increased soil erosion, changes to moisture conditions, and a decrease in overall soil health.

The changes in management practices over the past 25 years have resulted in increased SOC levels (Figure 2). Results from this survey show that, in 1991-94, the average hectare of crop production was a net carbon emitter from tillage, releasing 0.03 tonnes of carbon per year. By 2016-19, the average hectare was a net carbon sink from the adoption of conservation tillage practices, storing 0.12 tonnes/year. Similarly, from the elimination of some summerfallow practices, the average hectare in Saskatchewan was storing 0.02 tonnes of carbon per year in 1991-94, and 0.42 tonnes/year by 2016-19. The elimination of summerfallow contributes to increased SOC levels through reduced soil disturbance and increased crop residue levels from the shift to continuous cropping.

If these estimates are applied to a 1,000 ha farm, in 1991-94 this farm would have released 26.5 tonnes of carbon per year from tillage practices and stored 21.6 tonnes/year from a reduction in summerfallow. By 2016-19, this same farm would be storing 122 tonnes of carbon per year from the adoption of conservation tillage practices and 420 tonnes/year from the elimination of summerfallow.

To provide some context, the average Canadian vehicle burns 2,000 litres of gasoline and emits roughly 1.25 tonnes of carbon annually. A 1,000 ha farm in 1991-94 would have released 21 times more carbon than the average car from tillage practices each year, and by 2016-19 would be storing the emissions from 98 cars from conservation tillage practices. Similarly, this farm’s annual carbon storage from a reduction in summerfallow practices was equivalent to the emissions from 17 cars in 1991-94, and from 336 cars in 2016-19.

The results of this analysis show how far Saskatchewan crop farmers have come in improving their carbon capturing practices. Substantial changes in on-farm management practices have contributed to Canada’s emission reduction targets as set out in the 2015 Paris Climate Accord. With the widespread adoption of conservation tillage and elimination of summerfallow reaching nearly 100% of hectares, there is little room for future sequestration gains from these practices. Furthering agricultural sustainability efforts will require advancements and adoptions in other areas of crop production.

This analysis only looked at carbon sequestration, and not the emissions from agricultural production. Further research is required to quantify the total net GHG emissions from agricultural production. However, quantification of the changes in carbon sequestration provides a crucial first step in illustrating how crop production in Saskatchewan has improved its environmental footprint through increased soil carbon sequestration. Sharing results with policy makers and the public will help to give farmers a stronger voice when it comes to advances in on-farm environmental sustainability.

If so, registration is still open to complete the Crop Rotation Survey and have your voice heard in important agricultural and environmental conversations! Click here to register to complete the survey this summer! 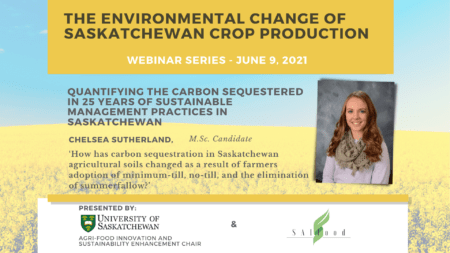 On June 9, 2021, Chelsea presented her Master’s thesis research as the first of the Webinar Series. If you would like to check it out, be sure to click to link below to watch Chelsea’s presentation on: