Canola is a large cash crop in Western Canada. While wheat and barley pay the bills, canola makes a profit. According to the Canola Council of Canada, canola contributes $26.7 billion to the Canadian economy annually, providing 250,000 jobs. Of that, $12.22 billion economic benefit is contributed to Saskatchewan. Despite such profitable promises, the canola industry is under threat of a soil-borne disease, clubroot. It is a prevalent disease in Western Canadian canola crops, many sites have been found in Alberta and it is spreading into Saskatchewan.

What exactly is clubroot?

Clubroot spores alter the hormone balance of a plant, leading to increased cell division and growth, resulting in lesions on the roots. These deformed roots reduced the plant’s ability to absorb water and nutrients, leading to the plant wilting, yellowing, premature ripening and shrivelling of seeds. Clubroot is a spore that spreads very easily by water erosion, animals, shoes, tires, machinery and wind. The thought of having to wash down every piece of equipment going from field to field as preventative measures are enough to make a farmer cringe. Once in the soil, the spore has a long-lasting impact as the disease spores can remain dormant in the soil for up to twenty years.

Clubroot threaten your fields and your pocket

Reducing the spread of clubroot is necessary, as canola is a profitable crop even under rising farm costs. In Alberta, where clubroot has become more prevalent, Alberta Agriculture estimates that in a 12-year crop rotation the disease can reduce yields by 35% to 75%. Such losses could mean an economic loss of $16 to $76 per acre depending on where it is in the rotation and if seeded canola more than every four years. Alberta Agriculture is discouraging farmers from growing canola on canola, as this would increase one susceptibility of contracting clubroot.

Clubroot is a long-term issue as it can remain dormant, therefore clubroot resistant canola varieties are becoming more readily available to farmers to help resist the occurrence of clubroot. Bayer Crop Science has said that their varieties have been developed to be resistant to the predominant clubroot pathotypes identified, however, clubroot populations may contain or develop additional pathogens. According to The Western Producer, many Saskatchewan farmers have pencilled in growing clubroot resistant canola next year. In the Western peace region, Bayer expects 25% of all canola acres next year will be clubroot resistant varieties. We need to turn our focus to research varieties and practices that defeat this pathogen. In the meantime, we need to be growing resistant canola, especially in the high-risk areas.

Prairie’s plan for the future

On February 11, 2016, the federal government along with the Alberta, Saskatchewan and Manitoba provincial canola grower organizations promised to fund agronomic research focusing on increasing canola production in Canada. Research investment has been promised to develop best management practices to reach an average of 52 bushels per acre by 2025. The Canola Council of Canada has set this goal to meet the projected global market demand of 26 million metric tonnes. The federal government will contribute $980 thousand and the provincial associations topping it up to an investment of $1.9 million over five years. The research will focus on disease management, stand establishment and pollinator health, increase canola yield and quality plus increasing profitability and sustainability and reduce production risk. This includes characterization of the new strains of the clubroot pathogen in Alberta and Identification and genetic mapping of canola for resistance to clubroot pathotype 5X. It has been recognized that researchers need to research effective genetically modified canola seed so that the canola industry can survive. With such a resilient disease, I think clubroot is going to be something that researchers and breeders will always have to come up with new ways to deal with the resistance. As a producer myself, I need to continue to grow canola to profit, but I cannot do so if clubroot remains a real threat. 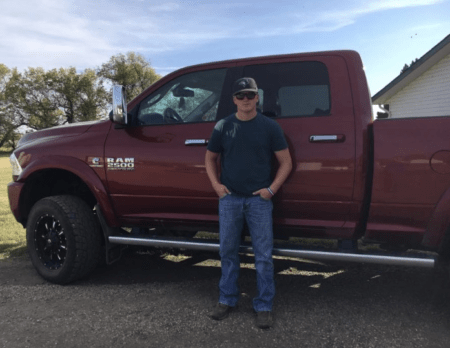 Hi, my name is Justin Cay. I’m from Kinistino, SK where my family operates a mixed grain and cattle farm. We run purebred Charolais cattle as well as grow and sell certified seed. I’m in my second year of my Ag Business diploma. My future plans are to go back home and take over the farm. I believe the future of farming is dependent on new technology to satisfy the increasing demands of society.