Of the four main genetically modified crops, cotton is one that northern climates have little to no experience with and therefore little knowledge about the impacts of GM cotton. In Western Canada, it is quite common to see the bright yellow fields of GM canola and it is becoming increasingly common to see fields of GM corn and soybeans. What we don’t see in North America is the impact that GM crops have on the lives of producers in developing nations. For instance, GM cotton has changed many lives for the better in India, despite what we often hear in the media. 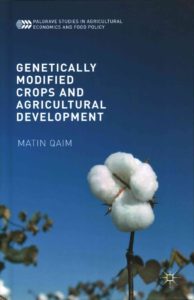 Recently a friend, Matin Qaim, published a book, Genetically Modified Crops and Agricultural Development, providing interesting and detailed discussions on how small farms have benefitted from adopting GM cotton. GM cotton is abundantly produced in India, and many stories have emerged about the crop having negative impacts on Indian farmers and society. Qaim, a professor at the German university of Göttingen, is the world’s leading academic researcher on GM cotton adoption in India. His findings demonstrate how crucial GM crops are to developing world farmers.

Qaim and his team have undertaken research in India virtually from the start of GM cotton production, compiling an extensive depth of knowledge and insights about its impacts. In part because they have been returning to the same farms, surveying them every second year to learn more about what is changing. They are dedicated to conducting long-term research as GM cotton production evolves within India.

In the short time that GM cotton has been available, Indian farmers have embraced this crop. First approval in 2002, by 2014 GM cotton accounted for 95% of the 28 million cotton acres. An estimated 8 million small landholding farmers doubled India’s share of global cotton production to 25%, due to production increases of 24% over the 2002-2014 period. More importantly, GM cotton has reduced chemical applications by half. Chemical application is done by hand with backpack sprayers. Qaim estimates this has reduced the number of pesticide poisoning cases by over 2 million cases annually.

The most significant GM cotton impact has been on farm incomes and food security. Farms which have adopted GM cotton have a standard of living 18% higher than non-adopting farms. As a result of increased household income, GM cotton farming has reduced food insecurity by 15-20%, allowing them to spend more on food purchases. Qaim calculates that one hectare of GM cotton results in an aggregate income that is 82% higher than farming conventional cotton. In addition, 60% of the benefits from GM cotton is helping the households of extremely poor or moderately poor. Low-income households in developing countries spend 70% of their total farm income on food, and increased household income from GM cotton has allowed for increased food purchases and greater nutrient intake of 5-10%.

GM cotton has significant impacts, especially with some of the poorest farmers in India. This crop is not a food source, but rather an income source which has been proven to increase the farmers household income, reduce food insecurity and backpack spraying of chemicals. All kinds of technology will be required to improve food security and the GM technologies is an important part of the solution to this challenge.