What risks are assessed before a GM crop or food is approved?

Any time a new crop or food product is approved in Canada it means it has already been assessed for risks and compared to similar approved crops or foods. Science-based risk assessment determines if the risks are equal to or less than the risks of existing products; if less the new product is approved. So, what kind of risks are assessed? And what rules govern the risk assessment? 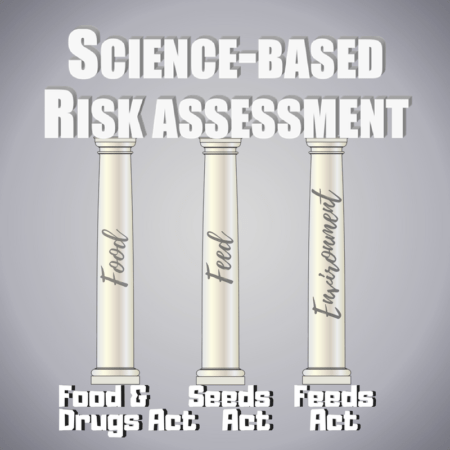 Since the 1980s, three Canadian Acts of Parliament govern the risk assessment process for GM crops and foods. While these Acts existed prior to this time, they were updated in the 1980s formalizing aspects and integrating components that had been located in other legislation. The revisions of the following Acts were in advance of GM crops and when GM crops were entering the risk assessment process, these Acts were scientifically rigorous enough that no new Acts were required to manage the process.

The Food and Drugs Act

The Seeds Act not only establishes thresholds for agronomics, but also the environmental safety risk aspects such as the potential: [su_list icon=”icon: check” icon_color=”#47907C”]

The Feeds Act was enacted in 1983 to set the maximum tolerances of nutrients for livestock. This Act defines the thresholds for the potential risks due to allergenicity, toxicity, digestibility and dietary exposure of the new variety relating to animal feeding. The Food and Drug Act risks assessed are identical to those assessed by the Feeds Act with the exception of being that assessment is based on animal consumption rather than human consumption of the new product.

The integration of these three Acts provide the regulatory framework for new plant varieties and food. Scientists within the Canadian Food Inspection Agency and Health Canada assess the data from crop and food developers. Through this process, any potential risks are identified by benchmarking the new variety tofexisting varieties to ensure that any new plant variety or food product is safe. This is known as ‘substantial equivalence’, whereby if a new variety equals the physical properties of existing varieties, it is deemed to be substantially equivalent to the existing variety and receives approval for commercial production.

For thirty plus years this risk assessment process has been successful and held up to the test of time. All of the GM crops and food products that have been approved for production and consumption in Canada have proven to be safe. Like other conventional forms of food, GM is safe and no more likely to cause allergies, be toxic or have harmful impacts on the environment. I know many Canadian regulators and they are excellent scientists and would never allow unsafe crops or food products to be approved.  We are fortunate that in the 1980s our regulators had the foresight to put in place regulations that have continued to protect us and our environment while commercializing crop and food innovations. This is a true testament to the merits of science-based risk assessment and why regulating the product is essential to a functioning risk assessment.