Canada has been called the ‘breadbasket of the world’, but those claims have diminished over time, as other crops like canola now account for the greatest number of acres. So how can we increase interest in wheat? This is exactly what I asked my fourth year students to do. It wasn’t as easy as asking ‘how would you innovate Canada’s wheat production, consumption and export system?’ Instead, they were split into five segments across the wheat industry: farmers, public breeders, private breeders, grain handlers and transportation and wheat processors, and were instructed to find where innovations were most needed. I was impressed by this group of future up and coming ag leaders’ ideas for innovating the wheat sector.

I would like to give a big shout out and acknowledge Syngenta’s generosity for putting up some prize money for 1st, 2nd and 3rd place. 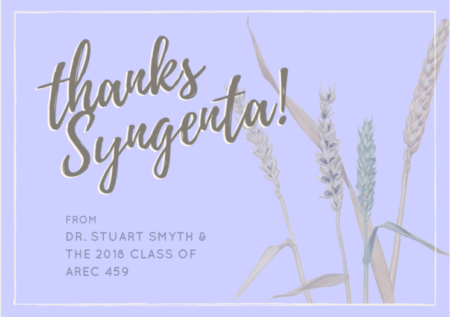 Over the past 25 years, wheat acres have been declining. With little influence on the price they receive for wheat, farmers could be encouraged to grow higher yielding wheat varieties with improved weed control options. Higher yields result in great profits, which can lead to more acres planted. From the students’ research they determined that if hybrid wheat could be commercialized with yield increases of 5-20%, this would incentivize farmers to increase wheat production. Additionally, making wheat herbicide tolerant would reduce input costs, further increasing the attractiveness of wheat production.

Should wheat breeding continue under Public or Private?

In spite of yield increases of 3% per year since 2000, compared to 1.25% in the 1980s and 90s, fewer acres of wheat are being planted. Given this, this group suggests that the development of Canadian western spring wheat (CWSW) varieties, which accounts for the vast majority of wheat acres, be taken over by private breeders so that additional traits, such as herbicide tolerance, can be included. Public breeders could pivot wheat development into new trending markets, such as white wheat varieties, which have a rising demand for the Asian soft noodle market.

According to Dr. Gray et. al, the private sector invests about 20% of what is publicly invested in wheat breeding, $6 million versus $33 million. Private sector developed varieties represent 5% of the CWRS acres seeded. To improve private investment, the students suggested that end-point royalties (EPRs) could incentivize private breeders to increase variety investments. Australia has adopted EPRs as a way of successfully funding their wheat breeding programs. Funding from EPRs could help lead research into higher yielding varieties, which would help to offset the higher royalties farmers would be required to pay.

You can grow it, but who will move it?

The students investigating the grain handling and transportation section identified numerous issues but focused on one solution, the interswitching or joint running rights of railways. Given that two firms control the majority of rail transport in Western Canada, allowing access to rail networks, opening up competition could increase wheat export capacity by 35% utilizing the existing system. Presently when a boat is waiting to be loaded, farmers pay this cost, even though they have no ability to control wheat transportation. Allowing American railway companies to have interswitching rights puts pressure on Canadian railways to increase on-time wheat deliveries, lowering the costs farmers pay to ship wheat.

Grown in the West, processed in the East

While Western Canada produced 95% of Canada’s wheat in 2017, milling and processing facilities are largely located close to large urban centers, in Eastern Canada. It’s also cheaper to ship a raw product than a finished one[1], that’s why the student’s suggestion was to integrate food and energy production. The waste that comes from milling and food processing can be utilized for ethanol production. By establishing more Canadian milling and processing opportunities alongside ethanol production, there could be a greater demand for wheat and potentially higher producer prices. Such a model of food-energy integration has already been successfully proven by the Manildra Group in Australia.

Not all ideas or innovations are equal

The students identified numerous opportunities, yet while there were all great innovations and ideas, they raised further concerns:

These students were given a challenging assignment, how to innovate an entire ag commodity industry. This is something our agriculture industry has to ask themselves if they wish to regain the title of the breadbasket of the world. As my students learned, the wheat supply chain hasn’t changed dramatically over time, and innovation is needed. There won’t be a single solution to increasing either wheat acres or the value-added aspect, rather a multi-pronged approach will likely be required.