Why I Take the Time to Communicate about Agriculture

The first color photograph of the entire earth was taken in 1967 by NASA’s ATS-3 satellite. For only the last 50 years we’ve been able to know what our home planet looks like. We can see that we live on a blue planet. Looking at this incredible image, humanity seems absent. And yet there are 7,500,000,000 of us alive on the planet right now, so many that from space at night we appear dominant. There were fewer of us 10,000 years ago, no more than 5,000,000. What has allowed our small, and relatively fragile species to cover the land and progress to the point where we can take pictures of our planet from 22,000 miles above? The answer, in part, is agriculture. We figured out how to garden food on a large and eventually planetary scale. Approximately 30% of the surface of the earth is currently devoted to the agriculture that supports our daily existence. Modern agriculture has allowed an increasingly smaller percentage of us to actually be farmers. In the U.S., fewer than 2% provide the food for everyone else. That allows more teachers, nurses, doctors, scientists, artists, engineers, and craftsmen to forge a better society.

I am a gardener. I have a deep respect for the gardening that modern agriculture accomplishes on a daily basis to feed, clothe, fuel and support human society. But nature is an excellent gardener independent of human intervention. The natural processes of our planet have resulted in an astounding amount of diversity powering the life cycles of our biosphere. There are approximately 400,000 plant species. About 20% percent of them are in danger of extinction, threatening the ecosystems that support life on earth including us. Historically, the clearing of land for agriculture has been the single greatest enemy of plant diversity. We’ve lost more plant species simply to the act of plowing them under and replacing them with our agricultural crops than by any other cause. As a gardener, a cultivator and steward of plants, I am obsessed with my seemingly contradictory awe of the agriculture that supports our society and its destructive effect on the biosphere.

Unwilling to sacrifice either the well-being of all humans or the integrity of the planet, we need to learn to balance our agricultural and environmental needs. No one person can chart our path forward. We need to build knowledge and wisdom through education, allowing millions to contribute to such a grand challenge. But education about plants and agriculture has been complicated by our migration into dense cities. Most of us, 60% globally, live and work in cities far from agricultural or natural ecosystems. We simply don’t see the plant-based systems we depend upon clearly or often enough. Through open agricultural communication, we can learn enough about the science and practice of agriculture to collectively make wise decisions. As a gardener and communicator, I aim to position people next to plants and each other to spark conversations about agriculture and plant diversity.

Now is a wonderful time to be in the business of connecting people to plants and agriculture. So many of us are deeply interested in what we eat and how agricultural practices affect the health and prosperity of our families. However, agriculture has been on the back burner for a while. It has made leaps and bounds in terms of technology and innovation while the majority of us were paying attention to other things. We’ve harnessed the ability to manipulate plants at the genetic level and talk about growing plants with modern machines in units of thousands of acres. To demystify our current agricultural system, we need only step into a farmer’s field, or bring some agricultural plants into the city, and simply start a conversation with those who know how to make a field or garden bloom. If we can learn to speak the language of agriculture to each other, we just may find that our blue planet becomes increasingly green. 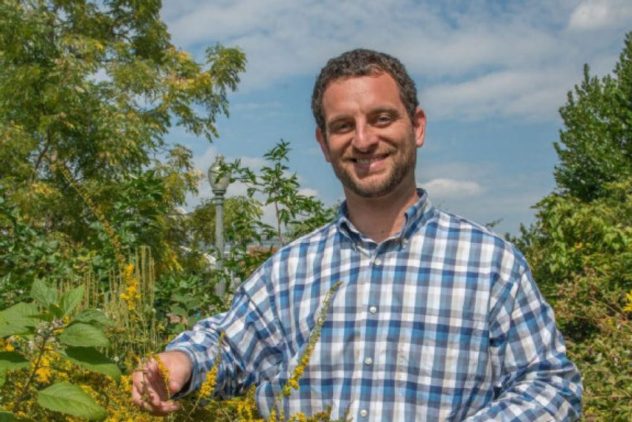 Ari Novy is the Executive Director of the U.S. Botanic Garden and a Research Collaborator at the Smithsonian Institution, National Museum of Natural History in Washington, D.C., USA. He has a bachelor’s degree in Italian from New York University and a PhD in Plant Biology from Rutgers University.