It’s not easy to be on the same page with someone else, let alone ask multiple nations to place the same importance on issues and align political views. Within organizations like the Food and Agriculture Organization (FAO), one hopes that nations would respect each other’s position and FAOs food security challenge. FAO has identified that greater efforts are needed to meet the growing nutritional needs of the expect 9 billion by 2050. To do so, genetically modified (GM) crops can be a significant player in ensuring global nutritional needs are met. However, the European Union (EU) is firmly opposed to GM crops, which negatively impacts global adoption. 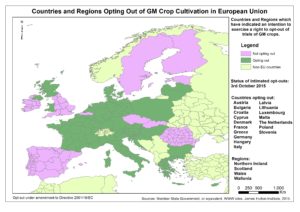 A recent publication in Trends in Biotechnology by Smyth, Phillips and Kerr, addresses the concerns from the EU decision to not support GM crops, in spite of hundreds of studies documenting the economic, environmental and health benefits. EU opposition is based on a European Commission agreement allowing Member States to domestically ban GM crop production. The authors advocate this policy is flawed, suggesting it ignores scientific findings, falsely politicizes risk and is a deterrent to developing country adoption.

SAIFood has shown in numerous blogs that the scientific community is in nearly unanimous agreement that GM crops are safe. With 25 years of research, GM crops are safe, environmentally sustainable and profitable. FAO supports biotech in the food industry and values its importance in achieving food security and nutritional goals. The EU can’t ignore these facts, sticking their head in the sand doesn’t change the fact that GM crops help reduce food and nutritional insecurities, especially in developing countries.

The majority of EU Member States have chosen to ban GM crop production and “has politicized and mischaracterized risk” from such crops. The EU has zero-tolerance for non-EU approved GM traits. This has allowed the EU to reject shipments of corn, flax, rice and soybeans due the low-level presence of non-approved GM traits. These traits have yet to be approved because it takes the EU several years to review and approve a GM crop for import, even though the trait is commercialized in the exporting country. The policy to reject crop shipments allows the EU to intimidate developing countries by calling wolf, stopping trade and costing the export country hundreds of millions of dollars in lost trade. Developing countries are terrified that if they adopt a GM crop, the EU will reject a crop shipment, resulting in millions in lost trade, which the developing country can ill afford.

GM crop bans in the EU deters other nations, particularly developing ones, from adopting GM crops. Why? Trade. If key trade partners restrict GM crop trade, developing countries either need to follow their lead or find new trade partners. The fear of losing the EU market is too great for most developing countries and are essentially coerced into having to reject GM crop adoption, thus losing out on the yield, profit and health benefits of GM crops.

While each nation has the right to set its own policies, it sometimes highlights the selfishness of some nations. FAO’s challenge to improve crop yields and food security have been insultingly rejected by politicians and environmental groups in Europe. Sadly, the effect of EU policies will result in food insecurity and undernourishment for hundreds of millions of people for decades to come.