By Warren Seib, University of Saskatchewan

In June 2020, Richardson Milling informed farmers that it would no longer be buying oats that have been desiccated with glyphosate or any other chemical as of January 2021. Richardson International is Canada’s largest agribusiness, and their new policy will have dire consequences for the agriculture industry. In the short term, it will reduce oat supply as producers move to other crops or produce oats using more expensive methods, absorbing additional costs. In the long-term, the ban on desiccants serves as further proof of the growing divide between consumers and agriculture producers. Agriculture in Canada is transitioning from many small family farms to larger farms, decreasing the number of Canadians with a direct link to agriculture. If the divide deepens, farmers may find all of their crops, not just oats, subject to chemical bans as a result of consumer pressure.

Richardson Milling’s ban on glyphosate will reduce supply in the oat market, lowering quality and quantity. Applying desiccants to oats removes moisture in the plant making harvest easier and desiccants also increase plant maturity consistency resulting in higher quality oats (POGA, 2020). Growers can use a swather, providing they own one, to stage their oats; however, swathers are less desirable than spraying due to the additional time required and lack of weed control for the future crop year. Producers may have to transport their oats further to find a new buyer which will also increase their expenses. Farmers would need to be compensated with a higher price for their oats to cover these additional expenses, or they will turn to a less-regulated crop like wheat. A reduction in seeded acres of oats will reduce the supply of oats and drive up the price until a new equilibrium between supply and demand is found. Richardson Milling could source more organic oats, but the price is higher (often twice as high as conventional) and the yield is lower (60% of conventional yields) (Hamm, W., & Martin., H. 2015. Pg. 6 & 10). This higher price will be passed on to consumers, who may be willing to pay for it given the recent backlash against agricultural chemicals.

Despite the ban, Richardson International presents a mixed stance on desiccants, but the message to the public can only be interpreted one way. The senior vice-president for agribusiness operations at Richardson, Tom Hamilton, explained that their decision to ban oats sprayed with desiccants was based purely on consumer demand (Arnason, R., 2020a). From a business perspective, the move makes sense for Richardson Milling as consumers are purchasing more herbicide-free food. The sales of organic food in Canada have jumped from 5.4 billion dollars in 2017 to 6.9 billion dollars in 2020 making organic foods the fastest growing section in the food industry (COTA, 2020). However, Hamilton further states that Richardson International believes that registered chemical products, including glyphosate, are safe to use and Richardson Pioneer (separate from Richardson Milling) will still accept oats sprayed with desiccants (Arnason, R., 2020a). Banning a product while also proclaiming it safe gives me the impression that Richardson is attempting to please both producers and consumers.

Unfortunately, only the negative message about glyphosate will resonate with consumers. From the lens of a consumer, when a company like Richardson bans a product like a glyphosate, the obvious conclusion is that glyphosate is dangerous. Otherwise, why would Richardson ban glyphosate? The world’s most widely used chemical has been under scrutiny in the last decade and not just from Richardson Milling. The International Agency for Cancer’s (IARC) contentious 2015 ruling that glyphosate is “safe to use,” has caused public concern of glyphosate to rise (IARC, 2015). Despite Health Canada disagreeing with this ruling, stating that “no pesticide regulatory authority in the world currently considers glyphosate to be a cancer risk to humans at the levels at which humans are currently exposed,” other firms including Grain Millers Canada Corp. and breakfast cereal giant Kellogg’s have stepped away from glyphosate (Health Canada, 2020a; Arnason, R. 2020b). These companies are reacting to consumer demand, but consumer demand is being fueled by misinformation from environmental non-government organizations (eNGOs).

Organizations like Friends of the Earth are pushing environmental policies on the agriculture industry, but the results of their findings can be misleading. In a recent study funded by Friends of the Earth, researchers found that switching to an organic diet would reduce glyphosate urinary levels in three days (Fagen, J. et al. 2020). In percentage terms, the reduction was impressive, with the average urinary glyphosate levels falling by 276 percent. However, that fall was from an average of 0.83 ng/ml (nanograms per millilitre) to 0.30 ng/ml, making the average difference on excreted glyphosate between a conventional diet and an organic diet 0.53 ng/ml. A different study found that urinary glyphosate levels are indicative of glyphosate retention and estimated that humans excrete 1% of ingested glyphosate (Zoller, O. et al. 2020). This makes the average glyphosate retention for a conventional diet and an organic diet 82.17 ng/ml and 29.7 ng/ml (urinary levels * 99% retention rate). A nanogram is one billionth of a gram, making the difference of 52.47 ng/ml seem negligible. Still, it’s useful to compare it to Health Canada’s guideline on maximum residual limits (MRL).

Health Canada sets an MRL of a chemical on food that is well below the level of exposure that has been scientifically determined as dangerous, which producers must meet to sell their grain. The MRL of glyphosate on oats is 15 ppm (Health Canada, 2020b). Converting 82.17 ng/ml to ppm yields 0.08217 ppm. For comparison, this is equivalent to 1 minute in 23 years, or 183 times below Health Canada’s safe limit. Therefore, organic diets do not remove the presence of glyphosate and both organic and conventional diets are magnitudes of order below the safe levels, to begin with. This does not stop media influencers from touting the benefits of organic foods. For example, a video produced by Bobby Parrish, a YouTube chef, encourages viewers to avoid glyphosate. In his video, he lists “facts” on the dangers of glyphosate that blatantly ignore the safe limits established by scientific health bodies around the world (Parrish, B., 2020). Unfortunately, this negative media towards the agriculture industry is becoming increasingly common and needs to be addressed by the agriculture community.

Farmers need to increase their communication with their public to manage situations like Richardson Milling’s recent ban. A simple way for oat producers to get their message across to Richardson Milling would be to boycott Richardson and sell their oats elsewhere. However, this may not be financially feasible, nor will it solve the underlying issue: the growing disconnect between consumers and producers. The push against conventional farming is championed by eNGOs and media influencers while the agriculture industry is driven by science, but scholarly articles may not be interesting to the average grocery shopper. Farmers need to work on involving consumers in the food process in any way they can. Producers could invite urban friends out for farm tours, talk to people about the agriculture industry, gently guide skeptics to scientific research explaining the safety of herbicides, or even become social media influencers like the Farm Babe (Cornell Alliance for Science, 2015). Without any action by the agriculture industry, consumer demand will continue to push grain buyers, like Richardson Milling, towards chemical-free crops of not just oats, but all crop varieties. 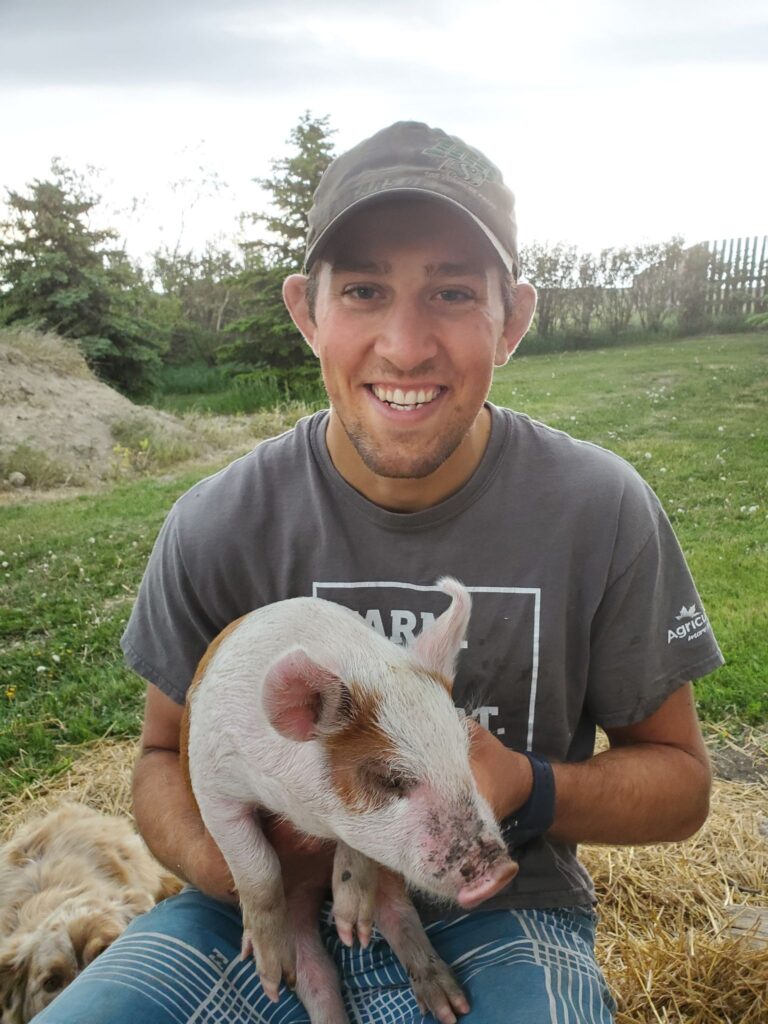 I work with my family southeast of Young, Saskatchewan where we run a mixed grain and beef farm. Currently, I am in my fourth year of Agribusiness with a minor in Field Crop Production. After completing my degree, I look forward to getting more involved in our farming operation and the agriculture industry.

In September of 2022, Warren will be joining our Dept. of Agricultural & Resource Economics Masters program in Agricultural Economics. We cannot wait to see where his research takes him!