Environmental groups that are opposed to the use of innovative crop technologies such as genetically modified (GM) crops that are herbicide tolerant (HT), frequently like to proclaim that the use of these crops has resulted in a substantial increase in chemical use. The simple answer to this is, yes, chemical use has increased. However, while chemical use has increased, farming is far more sustainable today than was previously the case. Here’s why.

Prior to the innovation of HT crops, farmers relied on cultivation to control weeds. On average, a field would be taken out of crop production one out of every three years and be regularly cultivated to control weeds. This practice is known as summerfallow. Summerfallow acres peaked around 1970 at 37 million acres over the three Prairie provinces. Throughout the 1970s and 1980s, summerfallow acres continually declined due in part to better farm equipment that allowed farmers to use zero-tillage practices and to a dryer climate. HT canola was first grown in 1995, when there were 17 million acres of summerfallow. The environmental impact of summerfallow is substantial as the conventional norm for effective weed control was to cultivate a summerfallow field 10 times during the growing season, which works out to about once every 2 weeks.

[youtube id=”rLb0bR_ZCnM” autoplay=”no”]The use of HT canola has provided farmers with a new option for weed control that they previously didn’t have. This has resulted in a decline in summerfallow acres of 78% between 1995 and 2014. The majority of this land that used to be summerfallow is now being used to grow food crops that require the application of chemicals to control weeds. With 9.5 million acres of cropland not being in summerfallow, but being used to produce food, more chemicals are applied to farmland today than has previously been the case.

The most recent summerfallow data, following 20 years of HT canola production shows a decline to 2.7 million acres. A farm survey I led in 2006, 10 years after the first use of HT canola, found that 86% of farmers that grew HT canola reported reduced soil erosion, while 83% reported increase moisture conservation. The new option for weed control has resulted in more environmentally sustainable means of farming due to the use of HT crops like canola, corn, and soybeans. 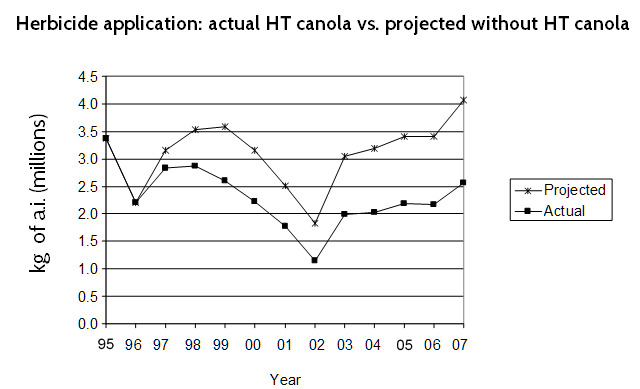 When environmental groups talk about how the use of HT or GM crops has increased the application of chemicals, they are only telling half of the story. Sadly, such comments neglect to mention that over three-quarters of the acres that used to be summerfallowed every year for weed control are now used to produce food crops in an environmentally beneficial way. The farm survey we did found that HT canola has actually led to a decline in chemical applications in spite of being grown on more acres. The figure below shows how much chemical use would have been required to produce canola assuming HT canola had not been developed, compared to how much was actually applied. This is a decline of 40%.