Is all land used for livestock capable of producing plant proteins?

Soil quality is crucial for all forms of protein production, regardless of whether the protein source is plant-based or comes from livestock. Over decades, farmers have learned which soils are capable of economically sustainably producing crops. Much of this knowledge was gained by trial and error when settlers tried to produce crops on land that lacked the soil nutrients capable of yielding enough to justify the costs. Later, when commodity prices increased, some marginal lands were converted to crop production. However, much of this land became uneconomical to produce on when prices dropped. Other cropland was found to be subject to wind and water erosion, and returning the land to pasture was the most environmentally sustainable way to produce food on such land. By the turn of the millennium, the vast majority of farmland in Canada was dedicated to the production of either crops or livestock and no longer alternated between both.

While farmers and those in the agricultural industry understand the production capacities of variations in soil quality, many outside the industry do not, and we can’t expect them to. However, those who may not know the full picture of soil quality also include some environmental organizations, anti-ag activists, and even the mainstream media, who are increasingly calling for an end to livestock production. The most egregious example of this was the New York Times and their recent fallacy-filled editorial on the dangers of livestock production. Many of those opposed to livestock production erroneously believe that the land used to raise livestock, as well as the land used to produce livestock feed, can seamlessly be used to produce crops for human consumption. For economic and environmental sustainability reasons, these lands are not capable of producing plant protein destined for human consumption. 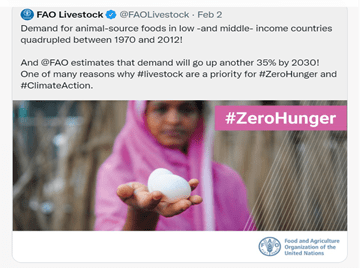 This naivety about livestock production that is being shared with the public is deliberately misinforming the public about the vital role that livestock plays in protein production and environmental sustainability. This image, provided in a tweet by the Food and Agriculture Organization, identifies just how vital livestock are for feeding the planet.

Not all land and soil is equal

Soil quality ranges widely across any agricultural area. Prime farming land is capable of providing high crop yields that enter into human food supply chains. As soil quality declines, it becomes increasingly challenging to produce food destined for humans, in either an economic or environmentally sustainable way. It is these lands where farmers have a deep understanding of how to best produce food for humans, without tilling the soil for crop production. Some soils are at risk of greater susceptibility to erosion when tillage is used, therefore lands of this nature are now destined to pastureland for livestock grazing or hayland that produces feed for livestock for lengthy periods of time.

Through farming land for multiple decades, farmers have learned which of their soil is prone to erosion and the majority of this land is utilized in livestock or livestock feed production. This results in marginal lands incapable of providing plant-based protein for humans, being able to provide meat protein for human consumption. This enables marginal land to be able to economically and environmentally sustainable for farmers.

As the FAO correctly identifies, the role of livestock production in agriculture is of vital importance for sustainably feeding an increasing global population. Livestock is a part of our ecosystem, and having them on the land not only benefits our food but also our ecosystem. Those marginal lands that are not capable of producing crops for direct human consumption are essential in providing protein that contributes to improved nutrition. Removing livestock from these lands would not increase crop production, with the end result being a general worsening of global food insecurity.