It appears everywhere you look and everyone you talk to has a different opinion on genetically modified organisms (GMOs). Whether it be good or bad, it often leaves consumers asking one question, what are GMOs? “A genetically modified organism, or GMO, is an organism that has had its DNA altered or modified in some way through genetic engineering” (Lallanilla, 2019). GMOs are used commonly throughout the world in many different fields such as research, medicine, and agriculture. Biomedical research such as genetically modified animals that model human diseases, pharmaceuticals such as insulin, and crops such as corn or canola are all examples where GM technology has been used (Encyclopedia Britannica).

GMOs in the agriculture industry

Genetically modified organisms play a significant role in the agricultural industry and are commonly found in crop production such as canola, corn, soy, and cotton. For years, plant breeders used selective breeding to produce plants with desired traits. Although plant breeders were successful, the process and research takes years and a product are not always guaranteed, nor is its approval. In 1995, Canada approved its first genetically modified crop, canola. In 1996, Canada approved GM corn and flax, followed in 1997 with the approval of GM soybeans (Smyth, 2014). Once genetically modified crops were approved safe for consumption, farmers were able to grow crops that were unthinkable just a short time earlier. One of the major modifications that have been approved in Canada has also been crops to herbicide resistant to specific chemicals, meaning the farmer can spray the crop for unwanted plants and weeds without killing the crop. In 2019, over eight million hectares of genetically modified canola were grown in Canada, accounting for 95% of all canola grown in the country (Bedford, 2020).

Research indicates that nearly 30,000 different food products contain genetically modified ingredients (Genome British Columbia, 2020). Some of the genetically modified ingredients that are in countless food products include corn starch, granulated sugar, and many different oils such as canola oil and cottonseed oil (Center for Food Safety and Applied Nutrition). The use of GMOs allows farmers to produce higher yielding crops which in return contribute to increased food production.

This graph from the 2018 Nature article by Pellegrino et. al, shows the effects of GMO corn compared to non-GMO corn. Pellegrino, Bedini, Nuti, and Ercoli analyzed 21 years of field data from 1996 to 2016 to observe the differences between GM corn and non-GM corn. As we can see in the graph above, the GM corn varieties resulted in a positive change in crops yields, while also minimizing the amount of damage to the crop that is typically seen with non-GM corn varieties. In the second part of the graph, the data shows that the GM varieties are less susceptible to many common insects and diseases that affect non-GM corn. This is greatly beneficial to consumers as the mycotoxins that can be found in corn can cause many health-related issues. Overall, the data concluded that GM corn varieties resulted in higher yields of 5.6 to 24.5% with lower risks of insects and diseases affecting the crop.

Why are GMOs seen from a negative perspective?

Luckily, I was fortunate enough to grow up on a farm and learn first-hand the important role GMOs play in agriculture. As the population continues to grow, more and more people are living in urban areas that lack, or do not have, a connection to agriculture. Unfortunately, we live in a world where a large majority of the population gets their information from social media. As a result, we can see incorrect information and advertising being spread, causing the population to be misinformed and not trust the agriculture sector.

Wonder Bread is one of the companies that take advantage of the public’s lack of agricultural knowledge. Wonder Bread advertises its products to be made without the use of GMO ingredients. They promote their product as being made with “no artificial flavours, colours, or high fructose corn syrup” (Wonder Bread Canada). Although the company is not lying about their products being non-GMO, Wonder Bread makes it appear to consumers that their products are the better, healthier choice compared to competitor companies. You might also see that non-GMO verified label and jump to the conclusion that they are using non-GMO wheat. This is true, but all wheat is non-GMO, and this is the issue that the label doesn’t indicate that it is verified as non-GMO because it does not source its corn syrup from GM corn.

As you can see on the packaging, Wonder Bread uses a third-party label to try and distinguish its product from the others. As a result, you might perceive this product to be a healthier or even a higher quality choice compared to its competitors. The appearance of the “non-GMO” label makes the product appear as though it is the better choice. Unlike many products with a third-party label, Wonder Bread prices its products at a competitive price. As a result of this, many consumers are willing to make what they believe is the healthier option at a relatively low price. The table below compares the cost of Wonder Bread white bread compared to similar white bread at my local grocery store in the fall of 2021.

A study conducted in 2018 in the United States showed that 48% of the population rarely or never seek out information about where their food comes from and how it is produced (Buhler and Kirshenbaum, 2018). Many rumours surrounding GMOs have been spread, diminishing the public’s trust in both science and agriculture. Many of the common rumours and misconceptions surrounding GMOs incite that GMOs are bad for us. Most common rumours indicate that GMOs are harming the environment and/or consumers. This can be seen in a variety of diverse ways such as GM crops causing biodiversity loss and GM products causing cancer in consumers. With all the use of these third-party labels, which clearly do not communicate what GMOs you are avoiding through their product, no wonder people believe that the use of GMOs should not be allowed. The attempt to provide information with these labels only creates more misinformation and confusion, even for myself, as the Wonder Bread label had me questioning what they were labelling the non-GMO for, that I had to go online to look it up. Now if I was in the grocery store, that label would have saved me no time or provided me with little information.

Growing the public’s trust of GMO’s

Think about the last meal you ate. Did you check if any of the ingredients were genetically modified? About 75% to 85% of food products contain genetically modified ingredients (Shaw, 2018). To stop the common spread of misinformation surrounding agriculture, it is important for the public to know and understand where their food comes from.

Although farming practices may seem simple to us who are familiar with agriculture, there seems to be a growing disconnect between the producer and the consumer. It is important for people in the agriculture industry to speak out about the work they do and how the food they produce ends up on the shelves at the grocery store and eventually on the consumer’s plate.  Programs such as Ag in the Classroom are a great way for kids to learn about agriculture. I believe if programs were offered at a higher level such as high school and university as well as reliable and accessible online sources, more people would become interested in learning how their food is produced. As more people learn how their food is produced, public trust in agriculture will increase while false information and misconceptions will decrease.

The bottom line is that GMOs were never created to cause negative health effects. If that was the case, they would have never been approved safe for human consumption. All genetic modification did was take the concept of traditional plant breeding and find a way to create new genetics more accurately and in a shorter amount of time. GMOs are a vital part of food production and completely safe for human consumption.

Buhler, Douglas, and Sheril Kirshenbaum. “Americans Are Confused about Food and Unsure Where to Turn for Answers, Study Shows.” Alliance for Science, 9 Mar. 2018, allianceforscience.cornell.edu/blog/2018/03/americans-confused-food-unsure-turn-answers/. 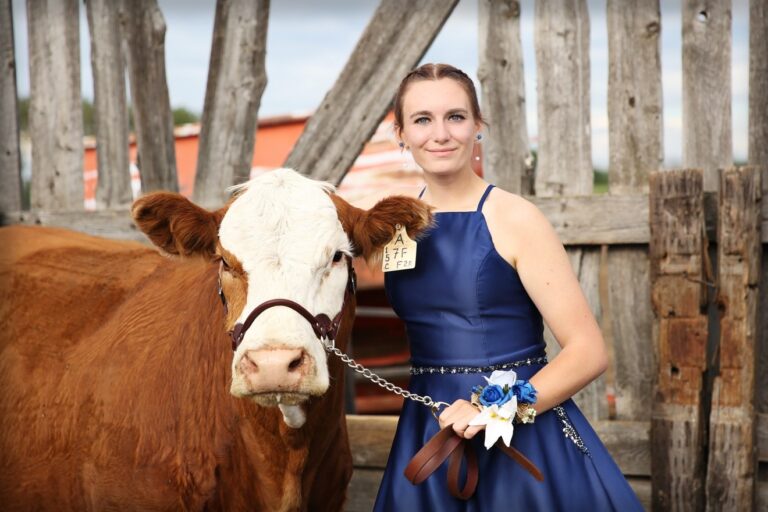 Hello! My name is Hailey Lang, and I was born and raised on a beef and grain farm near Waldron, Saskatchewan. Growing up and working on the farm is what created my passion for agriculture. Knowing I wanted to spend my life working in the agriculture sector, I decided to pursue a diploma in Agribusiness at the University of Saskatchewan. Now that I have graduated, I look forward to working in the agriculture sector as well as continuing to help on the family farm.