Latin America was present at ICABR 2020 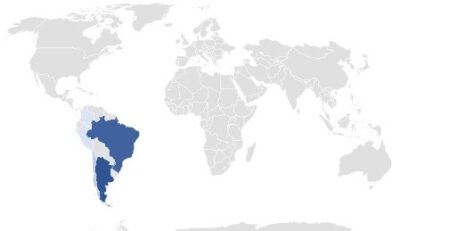 The 24th edition of the ICABR conference was very different from the previous 23, to say the least. For obvious reasons, no one is travelling and meeting in person in big groups. This was no different for researchers and academics originally planning (pre-COVID) on attending the ICABR conference in person this year. Meeting online this year had one notable positive aspect, it allowed a truly global community of researchers to come together and exchange ideas about the bioeconomy. It was amazing to discover the plethora of topics related to the bioeconomy being researched in Asia, Africa, Latin America, Europe, and North America. Due to the ease of access, anyone in the ICABR community was able to see any presentation they desired, and all presentations are now available on the ICABR YouTube Channel. For our first attempt at presenting digital, we feel like it was a real success, and we hope that those who weren’t able to join can find time to check out the fantastic presentation videos online.

Originally, the conference was supposed to take place in the beautiful city of Córdoba, Argentina, June 29 – July 3, 2020. This would have been the first time the conference would have been held in Latin America, and all thanks to IICA and the Argentine Ministry of Agriculture. While the in-person venue was cancelled, the focus of the conference did not change, as Latin America plays a vital role in the bioeconomy. A total of 27 researchers from Latin America presented their work at this years’ conference. Specifically, researchers from Argentina, Brazil, Chile, Colombia, Costa Rica, and Peru showcased areas and topics related to the bioeconomy being studied in each of those countries. It was inspiring to see that researchers in these countries have long recognized that biotechnology can contribute to economic development and natural resource conservation, as well as climate change mitigation. Below I describe just a few examples of the fascinating presentations I was able to see at this year’s ICABR Conference.

Argentina undergoes periodic economic recessions and socio-political crises (more on this here). In addition, the country suffers the effects of climate change and has begun implementing a series of adaptation measures. One such measure is a carbon tax implemented in 2018, that is not having the intended consequences according to a study presented at ICABR 2020. That is, it is not reducing greenhouse gas emissions at all, rather emissions are falling due to a reduction in the rate of economic growth. A perspective that could well serve other countries should they pursue a similar policy; a policy of such magnitude needs to be refined and adjusted according to the economic realities of each country. It was very interesting to learn about a study that considers both climate change and monetary policy.

Other things are happening in Argentina as well. Another researcher at ICABR 2020 discussed the dynamic and fast-growing tech sector, fueled by a growing number of technically capable and “outside the box” thinkers, is partnering with the agricultural industry to usher in a new wave of agricultural innovations. Argentina is poised to embrace precision agriculture in the coming years and the possibilities seem limitless.

ICABR 2020 also had an amazing series of expert panels. I was able to see a fascinating discussion between world experts about the genetic modification (GM) of banana.  If this crop is allowed to be grown by farmers and is embraced by consumers, it could be a game-changing crop with many positive impacts. While this panel was truly international (researchers from Switzerland, Colombia, Kenya, and the United States were present), there was a special focus on Colombia. The International Center for Tropical Agriculture which is based in Colombia; the Policy division of this institute is very interested in GM banana as a means to aid farmers to fight Black Sigatoka. A disease that causes significant economic damage to banana plantations in the country. The adoption of GM banana in Colombia would be very good news for both producers and consumers.

Another South American country was present at this year’s ICABR conference. A Peruvian researcher discussed the importance of cocoa worldwide, and how its production in Peru involves some 90,000 families. Traditionally, the pod husk is considered a waste product that goes unused once the cocoa beans are extracted. Peruvian researchers are now using it to develop a biopolymer by transforming it through mechanical and chemical means. The husk can also be used as a substitute for wood, in which rural families use a heat source for cooking, which could potentially reduce deforestation.

I was very surprised to see how advanced bioeconomy issues have been discussed or researched in many Latin American countries. I am very hopeful that biotechnology will play an increasing role in the economic development of these countries. I look forward to ICABR 2021, in whatever format we can meet. I am sure that based on this years’ experience, more Latin American researchers will feel compelled to showcase their work at ICABR 2021.

In the fall of 2017, Diego began working with Dr. Smyth as a Research Assistant. Diego has assisted Dr. Smyth with the elaboration of a technical report on the governance of ‘Digital Sequence Information’ and more recently, with Dr. Smyth’s focus on social network analysis. Diego has also actively been involved with the ongoing surveying of experts around the world to obtain a better understanding of new genome editing techniques and their implications for modern agriculture.In the fall of 2021, Diego began his Ph.D. Programme in Environmental Science and Technology, at the Universitat Autònoma de Barcelona. His plan is to model the urban food system and explore avenues to make it more resilient to potential shocks. In addition, he is looking at the environmental footprint of doing. While we miss him greatly, we are excited to see what research he is taking on and hopefully continue to collaborate with him in the future.Before joining the Smyth research team, Diego completed his M.Sc. in Agriculture Economics in 2016, on 'Ex-ante impact assessment of genetically modified maize adoption in El Salvador'.
View all posts by Diego Macall