Are peak benefits of early GM varieties still to come?

In recent years there has been considerable discussion about the perceived lack of benefits from genetically modified (GM) crops. Last month this was highlighted in a New York Times (NYT) article on the ‘lack’ of GM crop yield increases and non-declining chemical use. Unfortunately, the NYT missed some scientific evidence of economic and environmental benefits, hence the reason for this blog post. First let’s acknowledge that yes, GM crops have not ended global food insecurity as some had hoped, but let’s not insinuate that they aren’t pulling their own weight. They are!

When it comes to evaluating the success of GM crops, we’re limited to a small sample. It’s only been a mere 20 years since GM crops were first introduced. In this short time, we’ve seen changes in technologies, traits, demands and policies. Twenty years might seem like a long time, but it’s not in terms of agricultural innovation. While technologies and GM traits have evolved through science, it has been policies and approvals that are the hold-up issue. Unlike the electronic industry where technology firms need to bring a new product to market every three years to remain competitive, agriculture is not able to perform plant life-based research that quickly. 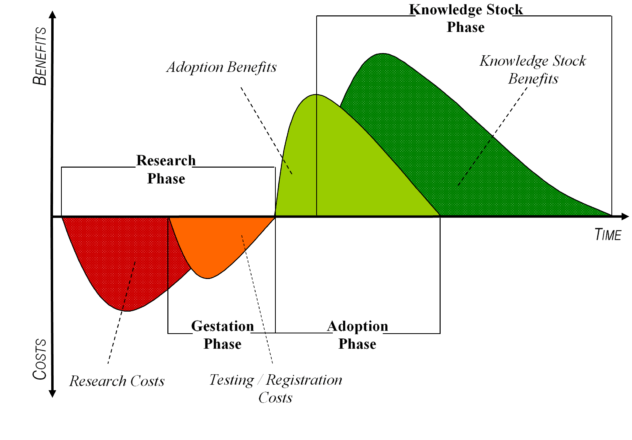 Extensive research by Julian Alston and colleagues’ show there’s as much as a 25 year lag between the initial research and development investment for a new crop variety and the peak of the technology’s benefits. In the below image, the peak of the dark green curve routinely occurs 25 years following this initial investment. Varieties of single trait GM canola, corn, cotton and soybeans had initial investments in the early 1980s, first approvals in 1994/95 and were grown by 1997. However, the GM crops we typically see today are double stacked varieties, which didn’t really breakthrough into the market until the early 2000s. So while we’ve reached the peak of our initial GM crops, the peak benefits of more advanced GM crops likely won’t occur until 2020. Peak benefits of varieties with multiple stacked traits are even further out.

As GM research advances, what is unclear from a research perspective is what happens to the dark green knowledge stock curve for GM crops? The hope is that our earliest GM crop innovation will be the benchmark of benefits to improve upon. However, over time and growth of innovation, it is unknown when, or if, the benefits of GM will it tail off.

Illustrated above, and stressed by SAIFood before, GM crops take a substantial investment of both cost and time to develop new crop varieties and get them approved. A 2011 Phillips McDougall study reports that R&D/regulatory approval costs can reach $136 million. Not to mention a new crop variety can take 10-15 years to reach farmers, depending on the crop. Delays reduce the value of the new variety, the longer commercialization takes the less value the new traits possess with farmers.

Perhaps the best is yet to come

Innovation is a slow and gradual process. It took mankind centuries to get to the moon and they didn’t do it 20 years after the Wright brothers flew the first airplane. In many cases, GM crops have increased yields, reduced chemical use and been profitable for farmers in a very short span of time. Global food security is being improved, in part due to the contributions of GM crops. To suggest that GM crops have fallen short is jumping the gun. As GM crops are improved and approved in developing countries, we hope to see these innovations becomes a lifeline to producers in food insecure regions and a catalyst to improved incomes and environmental practices. Climate changes will continue to impact the future of agricultural, we can only hope that GM crops and other agricultural innovations of the future can help society improve food security. GM crops might not be today’s ‘silver bullet’, but let’s not ignore that fact that they have a positive impact.