This year, writing our pre-winter holiday post has been a difficult task. As you know, it’s the season for that roasted turkey as your holiday meal, with all the sides and traditions. While we originally thought this blog would just write itself, given the current cost of food and the predictions of continued price increases, it is difficult to feel motivated to celebrate the beautiful turkey feast. So before we jump into what we originally had envisioned as an interesting look at the turkey, how it became the gold standard of Holiday meals, and its place in Canadian agriculture, first we need to discuss the awkward turkey in the room, its price and shortage! 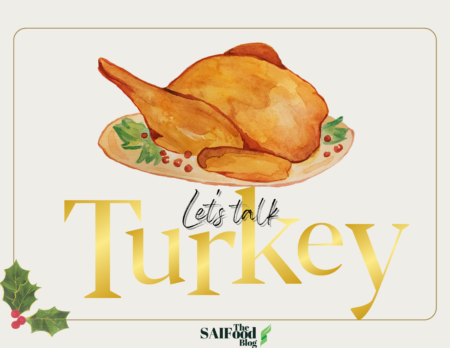 The state of turkey

Earlier this month, Stuart posted about Canada’s Food Price Report, which found from September 2021 to 2022, meat prices increased by 7.8% and the report forecasts 2023 prices to change by 5% to 7%. So when it comes to our turkey feast this Christmas and Holiday season, we aren’t too sure if you are all swapping out the delicious turkey roast for something else, maybe cutting some sides, or sticking with the big bird and the trimming and swallowing that much lower bill. Just last week, Dr. Sylvain Charlebois tweeted that he saw turkey prices jump from $4.84/kg in April 2022 to $8.80/kg (December 12) at a Halifax Sobeys. Now, we think it is worth it, but we also know for many Canadians, the growing costs of food prices will have a dramatic impact on their grocery shopping and holiday celebrations this year.

On top of turkeys and our holiday meals going up in price, there is also a shortage of turkeys this year. Why? Well, that’s thanks to the avian flu this past year. You might remember this spring being told to not feed or put water out for the birds, as the avian flu was a growing concern. Well, it turns out, there are still many areas across the country which have detections of highly pathogenic avian influenza (HPAI). On the Canadian Food Inspection Agency website, as of December 13th, in commercial production, 16 zones were infected of which 56 premises associated with avian production were infected. That means those that have turkey production, those birds will NOT be making it into the food supply this holiday season. When supply is tightened, and the holiday demand doesn’t decline, prices will only go up more.

The traditions of a turkey feast

Now that we have discussed that news, it doesn’t change the fact that it’s still that time of the year when turkey production is at its peak demand. But why is that? Have you ever wondered, how did turkey end up being our traditional meal? In Dickens’ ‘A Christmas Carol’ the turkey is the feast that Scrooge brings to replace the golden goose. How did this North American bird become the pillar of your holiday feast around the world?

The turkey of today originates back to the tamed fowl of the Aztecs from southern Mexico, some 2000 years ago. Recent traditions may have us all thinking of wild turkeys as being Americana, as every year the US President ‘pardons’ two for Thanksgiving, but they are very much rooted in Mexicana heritage and culture. These delicious birds are important in Mexican culinary traditions and are featured quite differently than just a roasted bird on a platter, you should check out the following link to great turkey dishes that are popular in the Yucatán Peninsula region.

While turkeys were first tamed by the Aztecs, it was the Spanish who helped introduce this bird to the rest of the world. At the start of the 16th century, as the Spanish invaded Mexican lands, they were gifted turkeys by the Aztec emperor, which Spanish conquistador, Hernan Cortes took back to Spain in 1519. In Europe, the turkey was domesticated and bred. Not long after, the turkey found its way across Europe, and it is said that King Henry VIII was the first British King to feast on turkey. It took another 200 years to grow into a larger farmed animal production in East England, Turkey (Constantinople), and the Netherlands. Yet, it was rich meat, and therefore not something that was eaten by the middle and lower classes of the English until it came into fashion around the start of the 1840s in the UK. It was Dickens’ 1843 publication of “A Christmas Carol’ that old Scrooge opened his heart and his change purse, by bringing the Cratchit family a turkey to replace their Christmas goose. Not long after, the turkey began to grow in popularity as the Christmas meal for the middle class of the UK.

Post World War II, with the introduction of many innovations in farming, the cost of production of turkeys dropped. This meant that turkeys were more readily available to everyone, and the turkey grew in popularity as the Christmas bird. With the help of Dickens’ story and films featuring large beautifully roasted turkeys front and center on a table, the turkey continued to grow in popularity as the bird of choice for Christmas. I mean a big turkey over a scrawny goose or chicken seems so much more impressive and delicious!

The ancestors of today’s commercial turkeys no longer exist as wild birds, and they are raised very differently than their ancestors. Today’s turkeys are typically not raised as ‘heritage birds’ which are turkeys raised slowly and often to larger proportions, and at a higher cost. Instead, the most demanded turkey is of a leaner meat, which has been bred to meet consumer demands and can be slaughtered at a younger age. In Canada, our turkeys are not given hormones or steroids and are highly regulated by both the CFIA and Canada’s turkey supply management system. The Turkey Farmers of Canada state that this system allows for consistent supply that is reliable, high quality, and reasonably-prices for consumers while allowing producers a fair return.

It’s not just a Christmas Turkey! While in 2021, Canada sold 35% of all whole turkeys at Christmas time, and for Thanksgiving 2.7 million whole turkeys were sold, which accounted for 45% of the annual sale of whole turkeys. To meet this demand, there are over 500 turkey farmers nationwide who produced 150.3 million kg of turkey in 2021 (36.5 Mkg sold as whole turkeys). Of our 2021 domestic stock of turkey (133.4 Mkg), Canadians consumed 3.49 kg per capita of turkey. That’s at least a 7 ½ lb. turkey for every Canadian, baby to adult available for consumption. While turkey demand may not be on the incline, especially given the growing prices and drop in supply due to the avian flu, it doesn’t make it any less special. For many of us, a turkey supper holds a special place in our hearts and memories, as it has often been the centrepiece of our holiday meals, which brought family and friends together, sharing special times.

Happy holidays to all our readers! We hope this winter season you can enjoy time with family and friends, enjoy a lovely meal, and make memories and relive traditions that are important to you. Wishing you all the best as we end 2022 and enter into the New Year!