Agricultural biotech may still be relatively small globally, but it is mighty

Biotech, we hear about it frequently, but what really is it? The Webster Dictionary defines biotechnology as the manipulation of living organisms (or component one) to produce a new product (often for commercial uses). There are different streams of biotech from medical, industrial, environmental to agricultural. Being that this is SAIFood, one focus is the biotechnological applications within agriculture, specifically genetically modified (GM) crops.

Since 1996, the International Service for the Acquisition of Agri-biotech Applications (ISAAA) has been publishing an annual brief of that year’s international developments in biotechnology. As part of our celebrations of Global Biotech Week, we thought it would be a great opportunity to share just a few of the wonderful snippets from the 2018 ISAAA Briefing.

Everything is coming up biotech

Last year a total of 26 countries grew biotech/GM crops over 191.7 million hectares (ha). Of the 1.3 billion ha of arable land, nearly 13.8% was dedicated towards GM crop production. The success of such crops has been thanks to the agronomic benefits such as yield, tolerance to growing conditions, resistance to pests and chemicals, and socio-economic factors. It seems for the USA, Brazil, Argentina, Canada and India, their major GM crops are reaching full adoption in their own markets. In the USA and Brazil the production of soybeans, maize and cotton have reached a 93% biotech rate of adoption. Argentina is close to 100% adoption when it comes to soybeans, maize and cotton. India’s planted cotton in 2018 was 95% GM. Canada, as also reaching that nearly saturated production of biotech with 93% adoption on average for canola, soybeans, and maize. 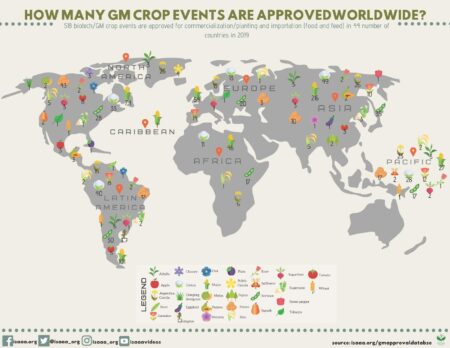 In 2018, a total of 174.5 million ha of GM crops were grown across just five nations (91% of all ha grown). The remaining 17.2 million ha are grown across Latin America, Asia, Oceania, and the African continent. While these regions are smaller adopters by land area, this does not suggest that GM crops do not represent a significant percentage of their arable land. According to FAO’s 2017 arable land data and ISAAA’s 2018 biotech crop areas, GM crops in Bolivia equalled 31% of the arable land, while. Pakistan’s cotton totalled 9% and maize from Philippine’s reach 11% of arable lands.

Of the 195 nations of the world, 70 were accepting of biotech. Of these nations, 26 were producing GM crops, and an additional 44 were importing them for food and feed. What may be surprising to some is that 26[1] of these nations importing GM crops were European.

Since the first approval of GM crops, a total of 387 biotech events (varieties) have been approved across 27 crops by nations[2]. In total, nations have offered 4,349 approvals, of which 2,063 were granted directly for food or food processing, 1,461 for the use as feed, and only 825 approvals globally have been granted for the production of 371 varieties (130 being for maize alone).

GM crops are the most rapidly adopted technology in the history of agriculture. Over 17 million farmers share in the benefits of this technology, with billions of individual consumers also sharing in the benefits. 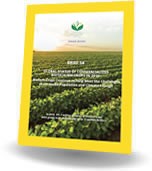