Are Products/ By-products of Cloned Animals Allowed in the Human Food Supply Chain?

Cloning technology has many aspects, and most aspects are widely applied to many foods that consumers consume (Miller, 2007). Cloning is a way to produce copies of animals by asexual means, this can be achieved in two possible ways (Canada, 2003). The first technique uses embryonic cells, products, and by-products of animals produced this way are allowed in the human food supply chain (Canada, 2003). More recently the second technique was developed, somatic cell nuclear transfer also known as SCNT (Canada, 2003). Dolly the sheep was cloned through this technique; products and by-products from these animals are not allowed in the human food supply chain (Canada, 2003).  This process of cloning is more complicated than the first technique according to Food Directorate Interim Policy on Foods from Cloned Animals. Miller explains that cloning technology will offer yet another tool to enable biologists, and animal breeders to make foods more consistent, nutritious, and tasty (2007). According to Plume 2.4 million angus cattle have been registered and of those 2.4 million, 56 were clones (2009). If clones are being produced, and have the ability to provide many different industries with many useful benefits, why is one technique allowed, and the other not?

Is Cloning Sustainable Compared to Conventional?

Cloning is an alternative way to produce offspring that will produce products used for the human food supply chain however, cloning is not the most efficient way of producing production animals (Smith, 2000). There are many benefits that come with cloning, it can be used in medicine, reviving endangered species, and a great benefit for the producer looking to improve their herd genetics according to the Genetic Science Learning Center (2014). Other benefits that come along with cloning is increasing the animal’s efficiency on feed, this is huge for the producer (Plume, 2009). Cloning of the Quantitative trait loci in the livestock population is feasible and can be of great use in production animals (Harlizius, 2004). Cloned animals can become resistant to certain diseases, have increased production, and increase fertility (Harlizius, 2004). However, Harlizius also stated that the health, and longevity of these animals can be compromised (2004).  Such problems can be a high expense for the producer. On average it costs about $15,000 to clone a cow and about $4000 to clone a pig (Plume, 2009). As the efficiency of cloning animals increases the price is expected to decrease (Plume,2009). Another consideration when looking at how sustainable cloning is, cloning has a success rate of 10% (Howard, 2016).  Even though cloning comes with great benefits, it is expensive and the success rates are low, suggesting that it is not sustainable compared to conventional practices at this time. The costs at this time outweigh the benefits as the price is just to clone the animal and does not include the expenses that go into raising the animal. Conventional costs if you were to purchase cattle it would cost between $2,000-$5,000 per head on average, and then another $556 per head on average in raising expenses (Griffith, 2019). Currently, the price to clone a cow is not as economically efficient for producers.

Should Animals That are Cloned Through SCNT be Allowed in the Human Food Supply Chain?

The major food-safety concern with SCNT clones’ products and by-products is whether the nuclear reprogramming that occurs during the process of cloning has any influence on the composition of the products (Eenennaam, 2006). Throughout various studies when comparing SCNT animals to non-cloned animals, they looked at the biological, and bio-chemical properties of the meat and milk. Results indicated that the product compositions were all within the normal food industry range (Yang 2007). Yang suggested that any differences in the products could have been due to the animals’ breed, feed, season, and point in the lactational stage (2007). However, the cause for concern is that cloned cattle calves have shown health issues such as fatty liver, cardiovascular failure, immature lungs, and one calf died due to immune deficiencies (Yang, 2007). Dolly the sheep, was the first animal that was cloned through SCNT, although her life was not as long as they expected, she still lived a healthy life of 6 years (Feltman, 2019). Another concern however is, certain sectors of the food industry fear that consumers may reject products, and by-products of cloned animals (2007). With these concerns in mind, studies have not shown enough evidence that SCNT animal clones are safe for human consumption (Canada, 2003). Cloned animals can also have great benefits for pharmaceutical uses, for example, some human therapeutic proteins require modifications specific to animal cells so they can be effective (Eenennaam, 2006). Genetically engineered animals could contribute as an important source of protein drugs (Eenennaam, 2006). Eenennaam also discussed how one company was able to produce spider silk proteins in milk from goats that have been genetically engineered (2006). These proteins can be used to produce BioSteel, which can be used in the industrial and military (Eenennaam, 2006).

The purpose of this blog is simply to show how cloning could be a helpful tool for producers and consumers of the human supply chain. Great benefits towards breeders by giving them the opportunity to produce the calibre of livestock they are looking for, and taking away the uncertainty that comes with breeding. There still are great benefits for the producer such as increase quality, and quantity.  There are also other benefits to other industries that they can provide. However, with the success rate being low, and the expense being high cloning is not a sustainable or efficient way to help produce food and other products. The uncertainty that still exists with SCNT cloned animals, will keep their products and by-products away from the human supply chain until there is more research done. 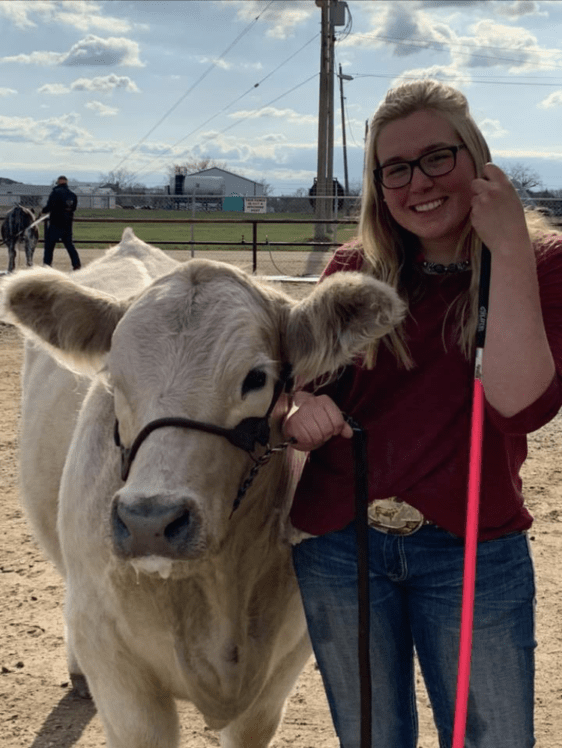 My name is Shelby Robinson I grew up on a ranch east of a very small town called Lake Alma, in southern Saskatchewan. I am currently in my third year of my Animal Science Degree. Having a love for animals is what contributed to my interest in Ag. I show cattle competitively in both jackpots and 4-H shows, and I am involved with the cattle operation that we run. Once I complete my degree, I plan to become a feeds specialist.